I apologize if this has been covered before, but I spent a while searching for anything on the subject and came up empty handed.

I really enjoy playing the NAK servers, but this past weekend it seemed like the entire server was being dominated by CAS strikes. Almost a quarter to a third of the server population were in aircraft of some sort and it just seemed very unbalanced from the perspective of playing on the ground.

But that's not the point of my post so I digress there.

Why no access to artillery pieces? I understand that there is some chance for misuse by misbehaving players, but if you put it under the same restrictions as the pilots where you have to be within a given role and be present on the teamspeak server for tasking and monitoring then it could be mitigated.

I ask because I have a small group that we do really well running support teams (Mortar, AA, EOD, Etc) and would really like to take a crack at doing proper artillery support on the server as Invade And Annex seems ripe for it.
Airsofter. Drafter. Gunsmith. Gamer.

We do allow the use of mortars, the FSG gunner will have access to the artillery computer. We do have a requirement that all shelled locations be marked on the map so that the FSG gunner does not get team kills. The other requirement is that the use of mortars does not prevent other players from being able to participate in the mission, meaning do not shell an area so heavily that other players can not get into the area.

As for other/heravy artillery, we have tried them on the server but it causes an unproportionate amount of TK's. Because of this, we have decided that the heavy artillery is not appropriate for the server.

We are working on making some changes to the server that may in the future allow the heavy artillery, but as of now, we do not have plans to add them.
Top

Well that's unfortunate... Its a shame that it couldn't be gated to only certain people who prove themselves capable of doing it without causing danger to players...

It's something that I really enjoy doing and would like to be able to do in something other than a single player or LAN game.
Airsofter. Drafter. Gunsmith. Gamer.

Artillery is available on our liberation server. There have been some players succesfully coordinating rocket artillery with the use of UAV's and spotters which worked to great effect.
Lead me, follow me or get out of my way
Top

You are correct Wave about the Liberation server. In that case, we decided to leave it as there is a commander role which can limit who has access to the equipment and whether the artillery is built at all, adding the needed checks and balances.

Now, we are working on a new version of Invade and Annex Tanoa, it has just recently been moved up in the to-do list, and on that server there is artillery but there is a limit to the number of times that heavy artillery can be used per AO and restrictions on who it can be used by. If it works out on the Invade and Annex Tanoa then it may be something we consider in the future for Altis and Malden. It is just not currently on the to-do list.
Top

My group and I will have to check out the Liberation server then, as we want to try our hand at running a artillery battery as a group tasked by other players.
Airsofter. Drafter. Gunsmith. Gamer.

As someone who has recently commanded a lot of Liberation campaigns, lots of good points here. As far as I&E, like many have said it is very difficult to coordinate precise tactical play in a open public server as far as artillery strikes. It would either be abused or cause more harm than good in many situations. Though it would be interesting to see a limited role only type use for it, (i.e. perhaps elite or certain in-game rank to use) it is hard to justify.
As far as the liberation server I absolutely love the ability, simply because the game type requires more realism. You cant just scorch earth campaign the server without consequence, you must at least 5 line the strikes to minimize collateral damage and the commander also has the ability to lock or limit the support. For instance because of the more realistic style of play as well as friendly fire a civilian populace consequence, when I do it I require an actual fire support request requiring friendly and civilian POS/Sitrep.
My apologies for not being as active as over summer, premed and fixing people isn't going to do itself, I've been busy 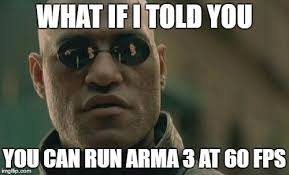